Which notorious jailbird had a premiere here?
Who’s ghost appears if he approves of the production?
Find out in this DVD… along with other hilarious theatrical anecdotes! 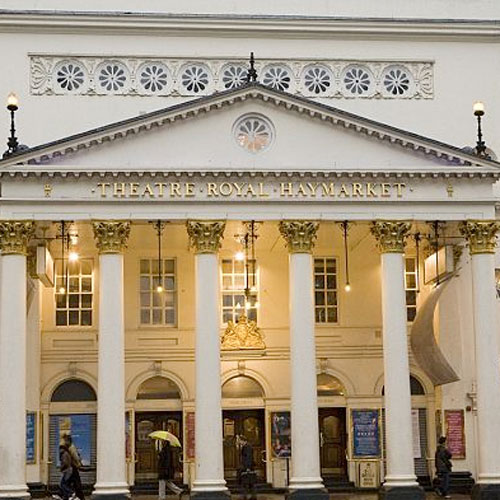 Also known as Haymarket Theatre or the Little Theatre, it was built in 1720 by John Potter and was the third public theatre opened in the West End.

In 1820 John Nash persuaded the proprietors of the theatre to rebuild on a site a little south of the old one to fit with his overall redesign of Haymarket. The theatre was re-opened on 4 July 1821, with The Rivals.

In 1853 John Baldwin Buckstone, established the theatre as a great comedy house, and the theatre hosted most of the great actors of the period. Buckstone’s ghost has reportedly
often been seen at the theatre, particularly during comedies and “when he appreciates things” playing there.

Herbert Beerbohm Tree took over the management in 1887 and installed electric light in the theatre. Under Tree, Oscar Wilde premiered his first comedy A Woman of No Importance in April 1893 and in January 1895 Wilde’s An Ideal Husband was first performed.

The Haymarket was the site of a theatrical innovation; in 1873, it was the venue for the first scheduled matinée performance, establishing a custom soon followed in theatres
everywhere.

It is a Grade I listed building, and seats 888 people. The freehold of the theatre is owned by the Crown Estate.